A vase of cut flowers that include a large pink peony and some yellow lilies. There are a couple of green buds of the lilies that have not bloomed out yet. 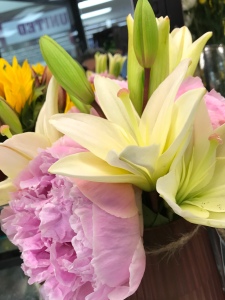 And for the Weekly Prompt – Bloom

For this week’s prompt we were asked to share a time we enjoyed a hearty meal. This could be at home, or out at a restaurant, and with family.

Mine will be a meal we had at a restaurant just last Wednesday.

We got together with family – seven of us all together, and went to a new to us BBQ restaurant called “Evie Mae’s”. It was in a little suburb town right to the west of us here, and is a BBQ place that is fairly new. 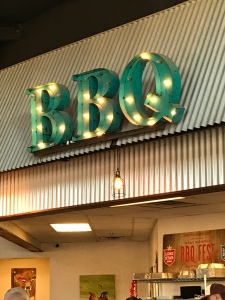 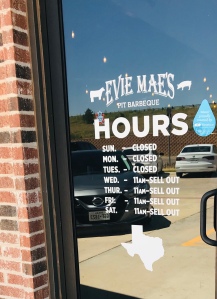 We didn’t know what to expect, since none of had ever been there before, but we figured it’s BBQ, so were sure there would be plenty of good food to choose from.

The list of what was on their menu was printed in big letters on brown paper up above the cafeteria style line. There was even a little chalk board that said ‘Free Beer – 21 and Up’.

As I was standing in line I was taking photos of all kinds of things, including the swinging doors the led off into the kitchen part of the restaurant. The doors had small windows, and advertising stickers pasted all around. 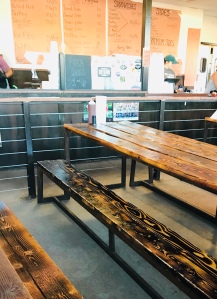 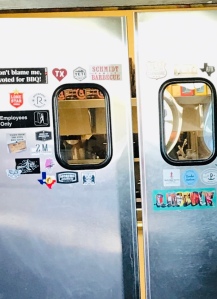 Here’s what I had to eat. Smoked sausage, sliced brisket, coleslaw, pickles & onions, bread & butter. It was very good. 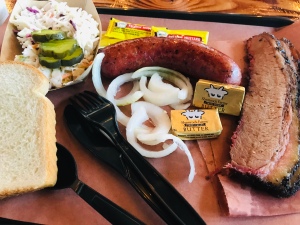 After eating and having fun talking with my family, my grand-daughter wanted to go exploring, so off we went walking all over the restaurant. She was having a great time, and I was taking more photos. 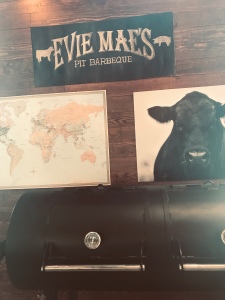 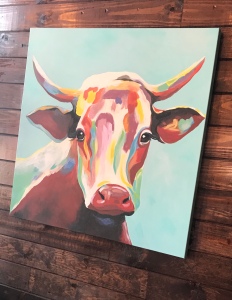 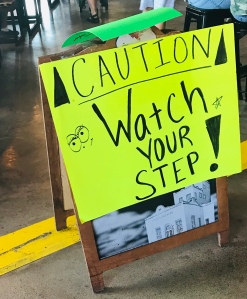 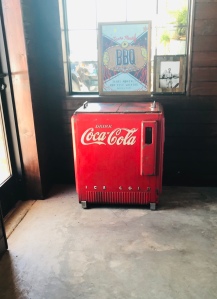 The photos above show a large black smoker/cooker with some pictures above, and the name of the place. A large oil painting of a steer, a ‘caution-watch your step’ yellow sign (because there was a step down there, some tall stools to sit on around a wooden bar area, and off a side area was an old fashioned box Coca-Cola cooler. Another part of the place had a meat market where you could choose something to take home & cook later.

While some of us had desert of chocolate pie and chocolate cake, I went outside for a little bit. I found this huge pile of chopped wood that I suppose they use for smoking all their meats for the BBQ.

Anyway, that was our fun day out with the family at the BBQ restaurant. I’d go back again some day. 🙂