Today’s letter to write something about is W 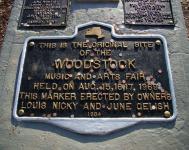 Pretty much everyone has heard of Woodstock. It was advertised as ‘3 Days of Peace & Music’, to be held in the summer of 1969, August 15-18. The setting was a huge field, in Bethel, New York. There were 32 music acts that performed, and the audience grew to at least 400,000. There was an award winning documentary made of the event, with actual film of the acts, and the many people who took part. It was directed by Michael Wadleigh, and released in 1970.

A song was written about Woodstock, by Joni Mitchell, which she sang. Later, Crosby, Stills, Nash & Young did the song, with a few changes. This is the one I’ve heard.

There are these leather sandals that were very popular back in the era of the 60s and 70s. They were made in India, I believe, and the soles were flat. There was an instep strap, a piece that went between the toes, and a toe ring. The way to get them set to your feet, was to get them wet, then wear them until they took on the shape of an individual’s foot sole. I had several of these, and loved them.