Join in the fun by clicking the information above! 🙂

Q – What fashion did you like most, and least from your younger years?

The fashions I liked most back then was bell-bottom pants. I was pretty much the first one of my friends in Jr. High School, to get a pair. I remember they weren’t jeans, but a dark blue fabric, and had a white shoestring type lace up front panel. Everyone was impressed…haha. The only thing was, we weren’t allowed to wear pants of any type to school. This was in the 60s, and girls had to wear dresses, and the length had to be mid-knee, or we’d get sent home to change. That’s what I didn’t like about the fashions back then. I wanted to wear my cool bell-bottom pants! The very year after I graduated H.S., girls were finally allowed to wear pants.

Other fashions I liked after school was your basic hippie clothes. I had it all, from the tie-dyed t-shirts (I made a lot of these), hoop earrings, water buffalo sandals, leather purses with fringe, and long, bead necklaces that we’d string, using those tiny, multi-colored beads we’d buy in the sewing notions part of the dime store. I still love all those kinds of fashion/clothes, and still wear them. 🙂 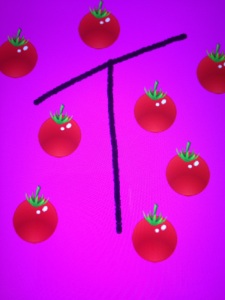 Today we have the letter T to write something about.

Tiny Tim (Herbert B Khaury, 1932-1996), was an American singer. He was well known as the ukulele player with the high falsetto voice,and long curly hair. In 1969, he married ‘Miss Vicki’ on one of the first televised weddings. It was on “The Tonight Show With Johnny Carson”. I remember seeing this on TV. His best known song is called “Tiptoe Through the Tulips”. It is very unusual, and memorable. A fun fact: I once drew a huge poster of him, that was hung up in our high school cafeteria, during a special senior carnival event. On the picture of him, I wrote ‘Tiny Tim Loves You’. haha…actually everyone liked it.

Other interesting things starting with the letter T:

Twiggy (Lesley Hornsby [Lawson]) is an English model, singer, actress, who was very popular in the mid 60s. She wore the styles of the day, had very short hair, and wore eye make-up that made her eyes look large. Later, she did more acting, and won Golden Globe Awards for her performance in “The Boyfriend”. Today, she has her own Twitter and Blog account, which focuses on relevant styles for women in their 60s and 70s.

Tie-Dye…It was a big thing to do back in the day. Taking a plain, white t-shirt, or other garment, tying or wrapping a rubber band around different sections of it, then dipping it in different color fabric dyes. When releasing the bands and drying the shirt, there would be unique patterns left from the dyes. I did a few of these, and they all turned out pretty cool.

Another great song from the Eagles, is “Take It to the Limit”. This song was written by Randy Meisner, Don Henley, and Glenn Frey, and released in 1975. Enjoy!

Mystery Box Chickens wish you a Terrific weekend! See ya on Monday! ☺