This is a story I wrote back in 2015. It was from a prompt on Friday Phrases, and the words were ‘alone again’.

My phrase for this was …  Her 5th marriage ended, just like the other 4. In a heartbeat, she was alone again. She wasn’t called the black widow for nothing. 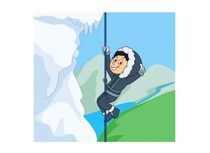 The media hoopla that followed Mr. Jolly Fellow’s accomplishments in mountain climbing, went viral. As the first person to conquer Mt. Deception, he was pretty proud of himself. However, his braggadocio rubbed some people the wrong way.

The families of his climbing expedition team mates had questions about how their loved ones met their unfortunate ends. They hired an investigator to look into the incidents.

During the gathering of information, and interviewing friends of Mr. Jolly Fellow, along with mountain climbing experts, a Mr. Yeti came forward. He claimed to be an eye witness to the murder of those poor mountaineers. He had hard evidence, capturing on his phone’s camera, the image of one Mr. J. Fellow, tampering with the ropes and other equipment of his partners. This was just what the investigators needed to arrest Mr. Jolly Fellow…which they did. They also subpoenaed Mr. Yeti to testify at the trial.

At the preliminary hearing and indictment, it was learned that Mr. Fellow had an obsession with the tv show “Murder She Wrote” Had watched it for years, even the re-runs. He wanted to solve crimes, just like Angela, but in order to do that, he had to commit the crime.

At first, he just fantasized about it. Later, he was so far into his psychosis, he believed he ‘was’ Angela, and even dressed himself as a woman, in private. In his real life, he was still the friendly, outgoing, adventurer.

Mr. Fellow subsequently bonded out of jail, until the trial could commence. When he returned home to await trial, Mrs. Fellow was not happy. After learning of her 5th husband’s alter ego, she took her iron skillet, and whacked him over the head, thus keeping her ‘black widow’ status intact.

Breaking the news to their children, was not as easy. Little Bobby was following in his father’s footsteps, as he’d already mangled the teddy bear (and had now set his sights on his sister’s collection of Barbie dolls). Mom put him into a rehab facility for troubled youth, for treatment.

Her teenaged daughter already had an inferiority complex. She also had delusions of being a Disney Princess…I mean, going around wearing that fancy ball gown, won her no friends. She spent awhile in therapy sessions, but now, after her meds kicked in, she just spent her days vegging out on the couch, watching “Murder She Wrote”, and eating crackers and Haggis.

What was a widowed mother to do? She got an account on a dating site, looking for husband number 6.

After the death of Mr. Jolly Fellow, it came to pass, that Mr Yeti became a hero. He was featured on the cover of People Magazine, and now people all over the world knew that Yeti, the abominable Snowman, Big Foot, and Sasquatch were real. He landed a book and movie deal, that made him wealthy. He used the money to make improvements to his community, of what is now known as Yeti-land.

Mrs. Jolly Fellow was never held responsible for killing her husband with the skillet. Her actions were seen as a good deed, after all, for saving the Criminal Justice System a lot of money and red tape. They didn’t have to provide prison housing, food and medical for Mr. Jolly Fellow, for years and years to come.

Mrs. Jolly Fellow did find husband number 6. It was true love, this time, and she retired her skillet…at least for awhile…Mr. True Love pampered his Mrs., and gave her everything she wanted. He knew he had to, or…whack…