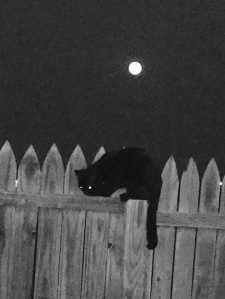 The big, white ducks were caterwauling out in the garden, you know, like cats having a fight.

Crumbling whole wheat bread for them to eat, and maybe get them to shut up, I went out there to see what was up.

Being it was late at night, I took the yellow flashlight with me, the one that is possessed. Why I took that one, I don’t know. Strange things happen with that one. It has a way of turning itself on and off by itself.

Come to find out, the ducks didn’t want the bread. They were assembled out there to be first in line for the initiation ceremony I’d planned. I managed to get them settled down, and lined up in a duck row, like they do, and we bobble headed our way out of the garden. And, that was that. Quiet reclaimed the night.

For a fact, I remember turning off the flashlight when we were done with the ceremony. Later, at 11:15 a. m. I found that it had turned itself on, again!

See you in my dreams? ☮️