After I posted my flashback post yesterday, about my Grandma’s Ghostly House, here  there was some interest in hearing more.

This then is a true story I posted on August 11, 2014, about my Grandma’s Spooky Garage.

Most of these happened when I was a kid, and I’d be over there at her house.

Have you ever felt like an unseen presence was watching you? You get that creepy feeling, maybe your hair stands up on the back of your neck, or you get hyper sensitive of any stealthy noises? Your ears want to hear something, anything, but you don’t…you just feel an overwhelming need to leave where you are. You are being watched. You don’t know who it is…or what it is, but you can sense they are there.

I have had this feeling lots of times. The most frequent was at my Grandma’s house…the one from my previous story. I could feel someone or something watching me in that back bedroom, which was scary, but the strongest feeling of this was in the garage. It was an old wooden and stucco outbuilding, right by the house. It was big enough for one car, and some items hanging on the walls on either side. The floor was just dirt, and there were two doors you’d have to open to get the car inside or out…no automatic garage door on this old place. The whole structure seemed kind of rickety, and there was always a musty smell, of old dirt and car parts. Nothing sinister, just the usual homeowner’s garage filled with tools, and other items.

However, if you went further into the garage, there was another door. Back behind where the car was parked, was a flimsy door. When in that little back room you could feel the weirdness. It didn’t look very strange, just a bunch of canning jars, and miscellaneous stored items, some junk from the house being stored. My cousin and I would always beg to go prowl around in there, though, mainly because it was spooky, and we liked to look at all the stuff.

The very best part, we thought, was an antique trunk. It must have belonged to some long lost relative, I don’t know, but it had all kinds of interesting things in there to look at. There were clothes from a bygone era, mementos, and a strange little box with this person’s hair in it…sort of a long tress of brown and gray, tied with a ribbon. It was fascinating!

Just as we’d get really into our discoveries, though we’d get spooked, because we could definitely feel/sense that we were being watched. Maybe it was the original owner of the trunk, but we never saw anyone…ghost or otherwise. We’d try to stick it out and keep looking, but it never failed, there would come a point where we had to run, run as fast as we could out of there, before the unseen entity grabbed at us.

I went in there lots of times by myself, even when I was told not to, but I couldn’t resist. I never knew what ever happened to that old trunk when my Grandma moved away. Wish I did.

Do you ever get the creepy, being watched feeling?

One more note: Later on, after I was grown up, when my Grandma would go out of town, she’d ask me to come over to water plants, get the mail, and just check that all was okay with the house while she was gone. I would do it, but I’ll tell you what…I did it in a hurry, because being in that quiet house all by myself, was almost too much to take. I could feel the watcher’s eyes on me the whole time!

There is one more story I can remember about strange things that happened in her house. I’ll post it tomorrow.

Thanks for reading my true ghost stories!

A shadow of a ghostly looking dog standing sideways that was on my computer screen. 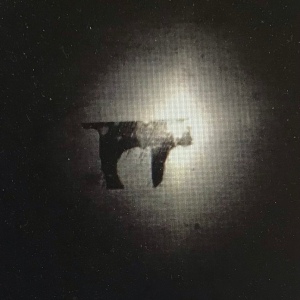 I am Ghost Dog

Why are you here?

Where are you from?

When did you appear?

When the shadows moved

What should I know?

Who sent you here?

The image in the photo just appeared on my computer monitor awhile back. It looks like a dog to me, so that’s what I call it…my Ghost Dog. … I don’t know, exactly when it came, but it is always there. It doesn’t matter how many times I clean the screen, it is still there. Anyway, I thought I’d ask it some questions, just to see what comes into my mind. These words above are the result.

We’ve since gotten a different computer monitor and the dog wasn’t on this one.

This was very odd! It is an envelope containing a Christmas card and has many notices from the post office stamped and written on it. That’s pretty odd, but it gets odder!

This card was sent by our friend to my daughter before Christmas … in 2020. She never got it, but the friend got the card sent back to herself with all these notices on the front … IN September 2021! Where was it for almost a year???

And that wasn’t all. We got a card just like it from our friend, except it was torn in half diagonally. We got half a card, and a special notice from the post office too.

It was quite the saga of the cards! 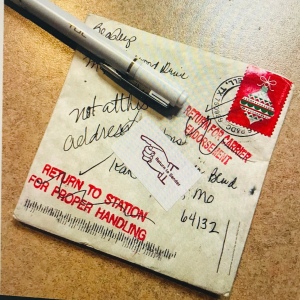 Thanks, Becky! Looking forward to a fun month of squares.

This isn’t a groundhog, but it is a funny gopher!

He’s fuzzy and sings and dances, and is from the movie, “Caddyshack”. We’ve had a lot of fun with him over the years, such as tricking the dogs (and people), setting him in all kinds of places and taking his picture.

Thanks, Becky! Looking forward to a fun month of squares.

Thanks, Becky! Looking forward to a fun month of squares. 🙂

This photo is of an egg we were frying. It has a double yolk! Then the reflection in the pan looks like a smile, below the double yolk ‘eyes’. haha!

Flower of the Day – Purple & Yellow

There is a yellow flower, but what I noticed about the purple flowers is there is just one white petal among the purple petals. Why? Makes it look unique, though. I like it! 🙂 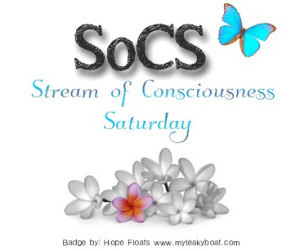 Today’s prompt word for both these challenges is ‘odd/even’

Find more about these fun challenges by clicking below:

The prompt words odd/even…it makes me think of math, and I don’t like math. I can’t really do it very well. Never could, as far back as I remember. I’m pretty sure I have the brain disorder called ‘dyscalculia’, which is a thing…a real thing, not just people not liking to do math. It is very odd, to me how other people just know about numbers, and how they work. Math and numbers, time telling, all the basic math problems, distances, measurements, well, all that is so hard for me to do. I just don’t get it, and when I have to do any, I make so many mistakes, and actually don’t even realize that I did make a mistake, unless someone points it out. Anyway, it’s odd.

Even is the other part of the prompt. Even… even what? It’s like math again…there are odd numbers and even numbers. Crap…everything comes back to numbers it seems. Give me letters and words any time. I like those much better. 🙂

Even Steven, Even Out, Even-tually I’ll be done with this post. I just have to remember the steps to take to add the logos for these challenges, and do the tags, and categories, and … and… sometimes I forget a step, and ‘even’ have to start over.

Hope y’all are having a wonderful weekend. 🙂