Farewell Squares until next time

April is a month of squares, hosted by Becky. The theme is ‘top’, and all photos must be squared.

To join in, and to see other entries, just click the above link.

Thanks so much, Becky, for hosting this fun challenge. 🙂

Thank you Becky for another fun month of Squares with a topic! She will be back with another challenge I think in June/July, but for now the topic is ‘top secret’.

Thanks to everyone who have visited here, too. I appreciate you all. ❤

This is a photo I took of my drawing of a UFO, with beams of light shining down from the aircraft that is on the top left of the page. All around the edge are the letters UFO, and there are shooting stars, too. It’s all done in purple.

The next photos were from an actual photo that was taken of what is believed to be UFOs flying over our city one night in 1951, and a short recap of the sighting. These appeared in our newspaper at the time.

After the song, which is a good one, and kind of eerie, there are photos of some of my magnets and key chains that are about UFOs.

I’ve been fascinated all my life about this subject. I’ve included a couple of Wiki links that tell of the Lubbock Lights.

To this day, if the government really knows the truth about UFOs, then they are still keeping it “Top Secret”.

A couple of Wiki articles about the Lubbock Lights:

“Eye in the Sky”, by The Alan Parsons Project. 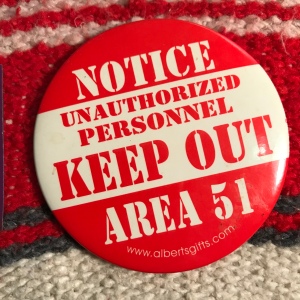 It was 1971. My friends and I were rolling down the road, singing along to the songs on the radio. We had no forewarning…

The little golden bell tinkled as we entered the shop. We’d never seen this place before, but there it was, exactly when we needed it, appearing out of no where.

You see, our van had broken down, now forlorn on the side of the road as we’d traveled the highways and byways. Adventure was our motto, but how could we continue now? We needed a mechanic.

This place didn’t look like a garage, but maybe we could call someone. There was the scent of burning incense and oregano, or maybe something a little more enticing, wafting in the small room. The merchant, came out of a back area. There was something strange about him, though, as he never spoke a word to us at first. He picked up two, lavender painted rocks from the counter, which he struck together three times.

“Your carburetor is fixed,” he said.

Well, we thanked him and left money for his help, as we stepped back outside to our van. It started right up, and we took off back down the road.

Now, you may think this was just a hallucination on our part, but it happened. Talking about it later on, we all said we’d felt an aura of danger about the man we encountered. We were all glad to be on our way.

Introduced in 1890, by Elijah Bond, as a harmless parlor game, the Ouija board has gained quite the negative reputation. It is a flat board, with numbers, letters, yes, no, sun, and moon, and good-bye, printed on it. A person/persons use a planchette to put their hands on, expecting the board to move the device around the board to spell out answers to the questions it’s been asked. Is this some sort of magic? Is it demonic? Is it just, as stated, a simple parlor game for kids?

I don’t know. Some people swear it is evil…that it opens a portal to the underworld and calls forth demons. Despite the warnings, the Ouija board game can still be purchased at toy stores today.

I had a Ouija board when I was a kid. Me and my friends played it all the time, with no ill effects. We’d ask silly questions…and it would move the planchette we had our hands on…and give us an answer. Most times it was right, and for a fact, we were not making it move. I don’t know how it works, but it does.

One question I asked it was, would I get a dog? It said yes. I asked when? It said January. (this was back in the fall). Sure enough, come January, I did get a puppy. I named him Dusty, and he was an awesome dog, who lived with us for many years.

Later on, my own kids were playing with a friend’s Ouija board, when they hollered, all excited, that they’d contacted a spirit called Seth. When I heard that, I made them stop, and told them the story I’d read about Seth.

It is written in a series of books, called “Seth Speaks”, by Jane Roberts. Her and her husband claimed they’d contacted the discarnate entity of Seth, and he was speaking through her. Her husband transcribed all she spoke, as Seth, and they wrote every dialog down in the book series. One of the main topics of the writings is, as Seth told them, that each individual creates their own reality.There is much, much more.

So, when the kids said they’d contacted Seth, I told them this and they put it away, never to play it again.

For more information on Ouija boards and the Seth books, go to…http://en.wikipedia.org/wiki/Seth_Material

Thank you for reading! 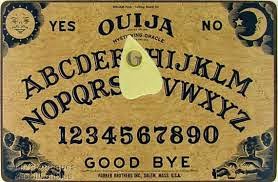 Thanks for visiting ! Peace }i{

10th DAY – LOST IN MY NIGHTMARE

LOST IN MY NIGHTMARE

In the obsidian midnight of my dreams

Nothing, no nothing, is as it seems

Forever and ever, my spirit weeps

A crystalline human, myself incarnate

I exist in dimensions, my aura will show

A higher vibration, an awareness to know

I swear my senses are not corrupt

Open my eyes…wake up, wake up

Lost in my nightmare, I’m not sane

I stare at nothingness, I’ll take the blame

My love for black…it’s manifestations

Color my world, in all incantations