This is the second house we had in Levelland TX. I liked it a lot. It had three bedrooms, a living room, kitchen, garage, and one bathroom. There was an apple tree and an apricot tree in the big fenced in back yard, too.

The dogs would fight over the apples when the fruit dropped from the trees, as they loved eating them. When they heard one hit the ground they would race over to be the first to get it. haha. They never wanted the apricots, though.

One day we heard a big crash, and a big hawk had crashed into our front window. He was okay, but a little stunned. The Mr. gathered him up and took him over to the park, setting him up on a tree branch. He did finally fly way.

We lost one of the dogs who crossed the rainbow bridge, which was so sad. But we gained a black cat. I found the little kitten in a parking lot and brought him home. He was a good kitty.

I liked how the kitchen was done. It was separated from the dining area by a short bar, and the room was separate from the living room instead of being all one big area. More like an old fashioned farm house kitchen, I guess you’d say.

We were here for awhile, at least a year I’m sure. Funny my daughter reminded me of the addresses of this house and the last one was almost the same – one being 703 and one 307. I’d forgotten that.

Then, we tried again to get a house back in our home town of Lubbock. We went house hunting several weeks, as we were wanting to buy one. Finally, we did find one and signed the papers right before midnight that night. I think (not sure) that our GI loan time period was going to run out to use it at midnight of that last day when we signed.

Then came the part of moving I don’t like. Actually packing up everything and moving it. Ugh what a job!

But we did it, and the next house is the last one. We’ve been in the last one for over 20 years now. 🙂 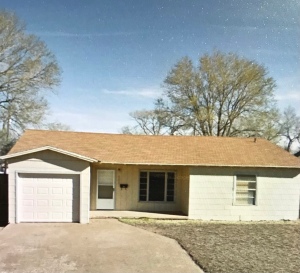