The princess and the ghoul

This is the night for frightening

A night to play the fool

Their costumes fun or fanciful

Tricks and treats are all in fun

Happy Halloween to them all

My painted rock (black) with yellow Party and orange dots

These are some kid’s Halloween parties where they were wearing costumes.

What kind of cake is served in a haunted house? 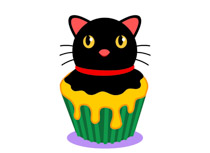 October in the fall

Love me and leave me

Me and my shadow

Blue as your eyes

Faces painted on pumpkins (photos by my daughter at local arboretum)

And these two were from my daughter’s photos at the local arboretum.  A large sunflower cut-out, and a green painted alien face.

A BALLAD FOR JACK

Out in the garden, way in the back,

A tangle of vines did grow.

There was a secret, hidden away,

For only me to know.

I watered and tended this special vine,

And, day by day it grew.

Soon, it revealed an orange orb…

I was the only one who knew.

I was so happy, I talked to it…

In fact, I named him Jack.

He grew up big and strong, that gourd…

I think he liked me back.

Then as the days grew cooler yet,

And, the sun was feeling dim,

I wanted Jack to stay with me,

But, it was time to part from him.

Jack said it would be fine…

I took my knife and severed him…

I cut him from the vine.

I cried a river, but through my tears,

Jack looked at me and smiled…

He said to carve a great big grin,

For every little child.

And, so I did, I carved a face

Now, every Halloween night that comes,

The moon at the start of an eclipse.

My attempt at a photo of the super moon one year. Deep midnight blue sky & the moon over the fence silhouette.

Some little bottles I painted and added fun stickers onto. The skeleton hologram (hanging) is an earring. 🙂

And these creepy clown creatures are in our neighbor’s yard!

From a haunted forest to a haunted house = Beware!

And a skeleton’s grin

And shutters are banging

There seeps a fog

So damp and dense

Both house and fence

The floors are creaky

No place for those

Dare you to come in with me

We don’t have any forests around here, but I’ve been to or through three in the past.

My family took a vacation in 1970 to Red River, New Mexico. It is located in the Carson National Forest. We stayed in a cabin by a river, deep in the trees. First time I’d ever seen so many trees. We stayed a week, seeing the sights, riding the ski lift, and carving our names into the trunks of the Aspen trees.

The next forest I’ve been to is the Pineywoods which is a forest, of East Texas, over by Texarkana. My in-laws lived there, and we’d go driving around and walking around among the trees. I got poison ivy on my feet one time. Not fun, but I marveled at all the tall pine trees.

The other forest I’ve been through is the (Washita) Ouachita National Forest, which is in the Texas/Oklahoma area. We drove through this beautiful place, along many steep and switchback roads.

My painted rocks for leaves (with faces) in brown, red, yellow, & orange.

These four yellow leaves came from our fruitless mulberry tree in the front yard. It always has tons of leaves that fall in the fall season.