It’s been awhile since I’ve done this challenge, so thought I’d do some more. Di, of Pensitivity101, is now the hostess. She posts prompt words, and we are to write whatever comes to mind. Find more details at the above link. Thanks, Di! 🙂

The words for today are:

Wendy the witch stirred her stew

All of a sudden that witchy stew blew

Double double a burst of bubble 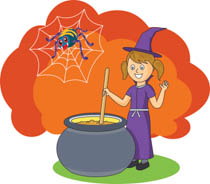 Fandango asks us to look back at an older post of ours that may not have been seen by very many.

You can find details at this link: https://fivedotoh.com/2019/09/27/fandangos-friday-flashback-september-27/

This is one I posted way back on September 17, 2013. It’s not exactly the same date as today, but close enough, I think.

DID I SAY THAT?

Just a funny story that happened at the grocery store.

My husband and I were going up and down the aisles of the grocery store commenting about this and that item.   At one point we were standing there by the racks of plastic wraps, foils, etc.   I asked did he know if we needed those bags…”you know, those sucky bags.”  He was confused about which ones I meant, of course, but he is used to trying to figure out what I’m trying to say, because what I say and what I’m thinking of sometimes are not the same thing.
I keep trying to think of the actual name of the plastic bags, but it isn’t coming to me, so I keep saying , “You know, those sucky bags, the one you suck the air out of.”  Finally, he figures out I mean the vacuum kind, where there is an air pump that you, yes, suck the air out after the bag is sealed, to keep the food fresher in the freezer.

We did need some of those, so added a package of them to our basket and went on our way.
However, while we were standing there talking about the sucky bags, there was a guy kneeling down restocking the nearby shelves.  He had overheard our conversation and was totally laughing!  We heard him loud and clear, but since we were already so far into it, there was no turning back.  We acknowledged his good natured laughter with our own.  My  husband then uttered his most frequent line to me, “You’re killing me!”

As chances would have it I encountered the shelf stocker several more times before we left the store, as I had forgotten some items and had to backtrack to get them.   Every time I passed by, he would say hi and ask if I needed help in finding anything else.  I’d just smile and tell him, no, everything is fine, I can find what I’m looking for now.

So, anyway, we finished our shopping, but I’m still laughing over it, and I’m glad we gave the shelf stocker a laugh.   He probably went home and told his family and friends the “sucky bag” story!

A Prairie Dog (not the one in the story)

Have I told y’all about Prairie Dog Corner?

One afternoon I was dog-sitting my daughter’s dog while she and her husband went out for awhile. That’s the dog in the photo. His name is Maynard. He’s a big, friendly, part Husky, part Labrador. He was out in the back yard. It’s a pretty big yard, fenced in.

I was in the house, when I heard some kind of noise out there, so I went to look. I see Maynard running around and around the yard, really fast. He was carrying something in his mouth, and it was squeaking. Okay, I figured it was his squeaky dog toy, which was brown and furry. But, as I looked closer, as he came running by, I saw it wasn’t a toy. It was a prairie dog, and it was doing the squeaking, for real!

What to do…what to do? I knew I couldn’t catch Maynard, he’s so fast, and also big enough to knock me down. So, I kept hollering at him to drop it…drop it!

After a few more laps around the yard, he did drop the prairie dog. The little critter wasn’t hurt at all, but was probably wondering how he got into such a predicament in the first place. We do have prairie dogs living close by the house, in the empty fields, so I suppose he somehow was taking a little tour of our yard, when to his surprise, he met up with Maynard.

Anyway, after being released from Maynard’s mouth, the prairie dog ran off, scampering under the fence, most likely to tell his friends of his escapades.

Now, you’d think this is the end of the story. It isn’t.

I refused to let Maynard back in the house, for the time being. I didn’t want to take any chances that the prairie dog might have been carrying rabies. You never know. So, I made the dog stay out. Meanwhile, I made a sign to hang on our door. It was to my daughter, who was expecting at the time, and SIL, saying ‘don’t come in until I tell you what’s happened’. I just wanted them to know, just to be on the safe side, so they wouldn’t get Maynard slobber on them.

They came home, read the note, and weren’t concerned about it at all! So we let Maynard back in, and all was good. No problems ever appeared since his encounter with the prairie dog. Thank goodness.

Later on, I painted the sign you see in the photo. I put it in the corner where Maynard had caught the little varmint. It’s forever known as Prairie Dog Corner, at our house. We laugh about it all, now. 🙂

Today the prompt word to use is ‘tingle’.

The Just Jot It January 12th prompt, brought to you by Tessa of the blog Always A Writer, is: “Tingle.” Use it any way you’re inspired to. And make sure you stop by and say hi to Tessa as well! Here’s her blog: https://finallyawriter.com/

What do you think that means?

We were at the store yesterday, waiting to check out at the counter. You know how they have all the tempting candies stacked up by the register? Well, I kept looking at one, and it spelled SpunoW. I couldn’t figure out what kind of candy it was. Then, I got a little tingle of excitement, because I was thinking, yay, a new kind to try. Maybe it is made of marshmallow fluff or something. I finally picked it up to see. To my surprise, the package was turned upside down.  When I turned it right side up, it spelled the name of a regular candy I’ve seen many times. (it was in a different, larger package though).

So, turn the word SpunoW around and you get Mounds! haha I couldn’t stop giggling. 🙂

For today’s SOCS we have the prompt word …egg.

To find out about this weekly feature, read other entries, and see how to join in, click below:

The Friday Reminder and Prompt for #SoCS March 19/16

Just the word egg today. I like eggs a lot. I can eat them for breakfast, for lunch, and for supper. I don’t get tired of them at all. I guess they’d be what I call comfort food. I like them any which way they are cooked. I’ve been hankering for some deviled eggs lately, too.

I had an egg this  morning. We went to IHOP, where they make eggs, and pancakes, and lots of other stuff that is good to eat. There is another restaurant we go to sometimes to eat eggs. It’s name is “The Egg and I”, and their food is good. I get an egg and Belgian waffle when I go there. Oh, bacon or ham, but not sausage. Restaurant coffee is good, too, so I get coffee at IHOP, but get a Coke at The Egg and I…I don’t know why.

My cousin has a small farm, where he raises chickens and turkeys. Sometimes we get eggs from there. They are all kinds of chickens, so the eggs are all kinds of sizes and colors. Here’s a picture of one of the chickens, and a flat of the eggs. 🙂

Here’s a funny story that happened back in 1979. I traveled to Japan right after Easter. The kids had some leftover candy Easter eggs, so I packed them in the suitcase. Well, when we went through customs their at the airport, it caused a commotion with the Japanese custom officials. The candy was wrapped in tin foil, and it had to be unwrapped and explained what these candy eggs were. I kept saying they are Easter eggs, but guess they didn’t understand? Finally, I just said ‘candy’, and that was ok then, and I got cleared to enter the country! Haha 😉

Well, that’s it for now about eggs. If I happen to remember some more about eggs, I’ll be sure to let you know!

Have a great weekend…and some eggs!

Would you travel out of state, just to look at a parking lot? Evidently, some people would.

For a long time, we had a lake in the middle of a parking lot, here. It was at the mall, and was located pretty close to the Dillard’s Department store. It became known as ‘Dillard’s Lake’.

Now, this lake was not supposed to be there, and at times would disappear. For some reason, that area of the parking lot sloped downward, making it lower than the surrounding paved areas. When it rained, it would collect the overflow from a nearby playa lake.The water would stay there for long periods of time, until it dried out. This has now been resolved, with the installation of a drainage system.

What was funny, is that it bacame a sort of tourist attraction. Lots of out-of-towners had heard of ‘Dillard’s Lake’, and came to see it for themselves. I don’t think the Dillard’s store was very fond of it though, as it took up at least 200 parking spots that their customers could have used.

Now, it is gone. All we have is memories of the parking lot lake, and a fun story to tell.

For a couple of pictures, and the news story of the lake in the parking lot, you can find it here. http://www.kcbd.com/story/855040/whats-the-dea  🙂