A to Z BLOG CHALLENGE … REFLECTION

This was the second year I’ve participated in the A to Z Blog Challenge. Here’s what I found I did different, between them both.

2014 – I wrote about random subjects. They were just things I found interesting, that corresponded to the letter of the day.

2015 – I decided to go with a certain theme for the whole month, and stayed true to it.

2014 – I didn’t plan ahead by very much, for each entry. I had a few scribbles of ideas for each post, but typed up the final result the morning of the day it was supposed to appear.

2015 – I looked up all the words I planned on using for the definitions, first, then wrote a funny sentence using that word, then seeing what the real definition was. All words were those I did not know the meaning of beforehand. I was really surprised at some of them, too. I also wrote it all down on paper, before the challenge began. I only changed a few of the planned words, as I went along.

2014- Doing the random posts, mostly unplanned, plus finding pictures, and adding links, took up a lot of time.

2015 – Having it all planned out early, actually only a few days early, was much easier, and I did not add pictures, or links.

2014 – I’d only heard of the challenge a day or so before signing up, and starting my posts.

2015 – Having done the challenge in 2014, I’d heard others say it was good to plan ahead, and possibly/but, not necessary, to go with a selected theme.

2014 – I did enjoy the whole experience of posting a blog entry every day. It was exciting to see if I could actually do this. Maybe I was a bit overly ambitious to do this on both blogs, but this was a challenge I felt up to.

2015 – This year I had fun doing the Daffy Definitions, making up the sentences, and learning some new words. However, I didn’t get that thrill of excitement, like I did with the completely random, seat of my pants blogging, as I did in 2014. I think I must thrive on chaos, disorganization, and doing things at the last minute…writing included. The more regimented way of pre-planning my theme, just wasn’t my style, at all.

I’m very proud of the way it all turned out…that I did finish the challenge, and am not in any way disappointed with my entries. I do plan on doing the challenge again, next April, but will most likely go back to a more random, whatever catches my interest type posting, though.

With all that said, that was a lot of “I did this, I wrote that:, etc. It’s the truth, I love to write, but without anyone to read it, I’d just be writing to myself. So, really…it’s mostly about YOU…all the wonderful, kind, readers that I write for. Everyone who took the time to visit my blog, to like the offerings that were presented each day, and to follow if you wanted to, and to all of you who left a comment…thank you so very much.

Hopefully my future, and former, posts will continue to give you a bit of entertainment.

I didn’t get to visit as many other blogs as I’d wanted to, so will try to do this in the coming days.

I’d also like to thank Mr. Arlee Bird, for founding the A to Z Blog Challenge. Without it, none of this would be possible. Thanks also, to the co-hosts, minions, and volunteers, who did so much, to make this year’s challenge a huge success.

Until next year… Happy Blogging! Peace 🙂 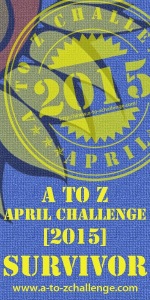