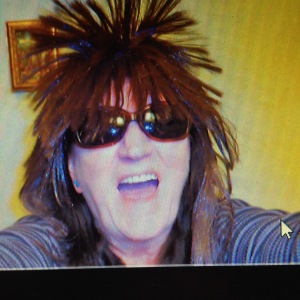 I would say not really. I did have it poofed out for a little while in all over curly style, but not that big. I mostly keep and did keep my hair long and straight. I tease up the top some, and spray it so it will stay up. My regular photo on here is how I’ve had it for years. 🙂

Day 21 Q – Tell me about the first home you remember living in with your parents.

This house is the only one I ever lived in with my parents, since my dad built it himself. We might have stayed somewhere else for a short time, but I don’t remember any one but this one. It was really small at first, until it was finished. We only sold this house a year or so ago, when my dad passed. I lived here from when I was a little bitty kid, until I got married, and then lived there another year while husband was in Viet Nam. Then we moved out. I came back to live there a few more times when he was deployed overseas.

To the right used to be a one car garage, but later on it was turned into a 4th bedroom. From the front door going left is the bedroom that was mine. In back of that one, was another bedroom, and beside it was another bedroom. Going down the middle hallway there is a bathroom on the left, then you come to the entryway to the kitchen. Oh, the 4th bedroom is at the end of the hallway, and has another 3/4 size bathroom. So behind the kitchen to the back of the house, is a laundry room. It has a nice window to look out into the back yard, and a little table and chairs were in there. A half bath was in there, too. There was an attic, where we kept junk. It just had plywood down the middle and it would get so hot up there in the summer, but we loved to prowl around in there. Out the back door is a big yard and garden space. Dad built a big shed/tool shop, and we had a cellar he’d built. At one time he’d made a drinking fountain and a big brick fireplace out there to grill on. Behind the back yard was someone else’s house, then huge cotton fields, then another housing addition, then the airport. We’d see planes coming over the house all the time, really low, when they were coming in for landing. I’d wave at the people in the plane. 🙂 That’s about it. It was a great place to grow up.