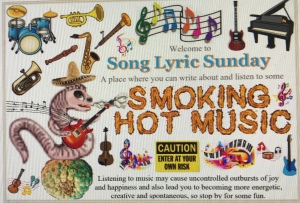 This week the theme is songs by Australian singers/groups.

Thanks to Jim Adams for hosting this musical challenge each week.

To join in today’s challenge, and also see other entries just click this link below:

There are so many Australian singers and groups who have some really great songs. Today though, I feature Australian country singer-songwriter Kasey Chambers.

We’ve been listening to Kasey Chambers’ songs for a long time, and like most all of them. We have several of her CDs. I’ve even heard her in a live interview, a long time ago, on ABC (Australian Broadcast Corp.), on my shortwave radio. She does lots of worldwide concert tours, and if she ever came here, I’d go for sure.

I like all her songs, so it’s hard to pick just one, but here is a favorite:

Link to the Wiki article which tells all about the song and the awards.

In 2017, the song was selected for the National Film and Sound Archive‘s Sounds of Australia collection of historically and culturally important recordings.[2]

The song was written by Chambers as a commentary on the reluctance of commercial radio stations towards playing her music, despite her being an established performer.[1] However, the single prompted Chambers’ commercial breakthrough and was most-added song to radio station playlists in 2002.[1]

Lyrics are on the video:

Thanks for visiting!  Peace ☮️