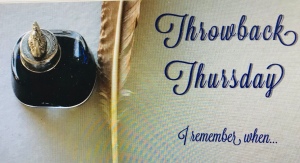 This week Maggie poses some questions about chores and allowances when we were a kid, and even later on. Thanks, Maggie! 🙂

Here are a few things to remember back on:

Did you have chores you were responsible for? At what age did that begin?

Were you required to make your bed and keep your room tidy? Did you have the responsibility for those chores for siblings or others in the house? Were chores evenly distributed?

Were you asked to take out the trash, mow the lawn, or do the dishes? How about cooking?

Were you given an allowance? If so, at what age and how much?

Were there repercussions if you did not do your chores?

How did you establish chores once you had a home of your own?

I don’t know what age I was able to do any chores, but I do remember getting to wash the dishes. I really liked doing that. I still like doing that – by hand. We’ve had a dishwasher before, but not in quite a few years, and we didn’t have one when I was growing up. I would even volunteer to do dishes at my grandma’s and granny’s house if we’d had a meal over there. It’s fun to do someone else’s dishes because they were different from ours.

My sister and I would help with the kitchen floor. Not a totally every time deal, but quite often. The floor was linoleum, and mom wanted it waxed. The Johnson’s paste wax smelled good. We’d get rags and smear it all over the floor, then other rags and buff it off. Later on we had an electric waxing/buffing machine to use. That was fun, too.  Now however, I hate doing floors of any kind.

My sister and I never got an allowance as such. We were lucky to have plenty of what we needed, and would get treats from time to time. We did get a dollar for every A on our report cards though.

Early on my cousin and I would make crafty things to sell. We’d go to grandma’s and all the neighbors with our stuff and they’d buy from us. We’d make braided yarn with little pouches for cinnamon spice and cinnamon sticks tied on with ribbon. We’d also make soap decorated with ribbon and little artificial flowers to hang in the bathroom. We did quite well with both of these. I think we charged 75 cents for both of these.

A little later on I would take in ironing to do for others. I loved to iron! I had quite a few customers who’d bring their clothes to me by the dozen. I was still in elementary school when I did this. I also continued to do this for many years, up until only a few years ago here.

I think we probably did whatever we wanted to with our own bedrooms. We didn’t get nagged much to keep it tidy. But later on as a teen I kept it fairly neat.

We basically kept on this same way when our girls were growing up.

That’s about all I can think on it for now. 🙂

Thanks for visiting! Peace