Fandango asks us to look back at an older post of ours that may not have been seen by very many.

WAS THIS HOUSE HAUNTED?

My Grandma’s house always had a spooky feeling to it.   As a kid, my cousin and I would spend the night over there in the back bedroom……even though we were scared of that room.   It felt like something was watching us from up in the NW corner of the ceiling.   One night we heard what we swore were babies crying in the living room, so we sneaked in there to have a look.   The room was dim, but no lights were on.  What we saw was the old rocking chair just rocking back and forth, with no one in it.   Could this have been a ghost, rocking a ghost baby?   I don’t know, but that’s what we believed. There were many more strange things happened in that house.
I will tell more in later posts!
Peace, Love, & Light
***
And a little more about it in a later post: 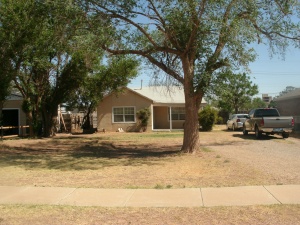 Here’s a picture of the house today. It looks like a regular old house, doesn’t it? I don’t know who lives there now, but I always wonder if they have weird things happen in there like we used to, all those years ago. It looks about the same as when my grandparents lived there.

My next post will tell more about the creepy things I felt in and around the garage, which is over to the right, and back a bit.