What Have I Been Reading?

I do read a lot of books of all kinds, but favor the memoir and biography type. Then sometimes I want a change and read some fiction.

These are just a few of the books from lately.

“Walk to Beautiful” (My Story), by Jimmy Wayne (Barber). The words under the title say, ‘The Power of Love and a Homeless Kid Who Found the Way’.

Jimmy Wayne is a country recording artist, who tells of his life from early on, living in poverty, an abusive family life, and his struggles to better himself and his situation. He was in and out of foster homes, and detention centers, lived in horrendous conditions, and yet survived. Later on, he wanted to help other foster kids, by raising awareness , and made a 1,700 mile walk across America.

There are lots of personal photos in the book.

It tells the story of Sam, a high school student who is also a computer hacker. One of the best, in fact, and gets the attention of the U. S. Government, resulting in him being recruited to help them rout out other hackers and terrorists all over the world.

There is a lot of computer lingo, but it is simply explained, and doesn’t detract from the overall story. If you are a gamer, or know a lot about computers and how they work, you’ll like this one. I sure do.

There are dark forces that get into computer networks, and Sam and others job is to eradicate them before they destroy everything.

It reminds me a lot of “Ready Player One”, and also “Ender’s Game” series. Both of these were good.

I’ve only been reading this one a couple of days, so am only about half way through. It is definitely a page turner!

“Scratch Beginnings”, by Adam Shepard tells of his true story of living a year as a homeless person. He starts out with nothing but $25, and a few things in a back pack. He wants to see if he can survive on the streets, and the homeless shelters he stays at. He tries to find a job to earn some money, finding it hard, as so many of those who are down and out do.

He tells of the people he meets along the way, and gets a better understanding of how destitute people are treated. 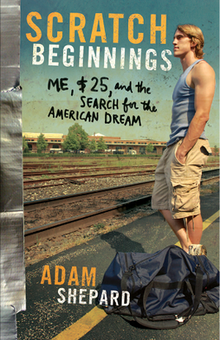 “Here’s the Story”, by Maureen McCormick, in which she tells of her life as a child actress on “The Brady Bunch” (Marcia), and her life after the show was over. She seemed to never be able to reconcile herself and her alter ego Marcia from the show. This led to many destructive habits (drugs), and how she overcame them.

It’s an eye-opening look at how some celebrities fall from the heights of success, to the depths of despair, and struggle to find themselves again.

There are lots of personal photos and also behind the scenes remembrances of being on the TV show.

“A Sliver of Light”, by Shane Bauer, Josh Fattal, and Sarah Shourd, tells the true story of how they were imprisoned in Iran. They were hiking on a beautiful afternoon in Iraq, when accosted and taken in by the Iranian border guards. Falsely accused of espionage, they spent two years imprisoned, surviving on their wits and strength.

Told by all three are their day to day living conditions there, and speaks of some who helped them there, and also their family and friends back home who dealt with the press, and the government red tape in the U. S. and in Iran.