I finally got to see the babies!

A few weeks ago, March 28, Little Orange had her babies, then she hid them away. 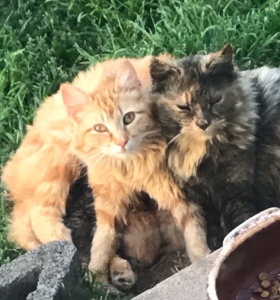 Then, this past Sunday, she brought them out to introduce them to the food bowl. So cute!

Little Orange and Sister cat are still great buddies. Not sure if SC had babies, too, but at least one looks just like her. Anyway, they both are taking good care of all four babies.

Series of photos of mamas and kittens (on the back porch) and in the grass. One black kitty, two orange ones, and one tortoiseshell one. 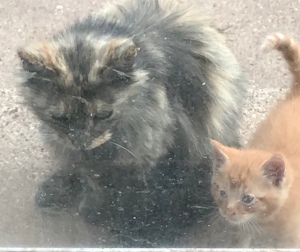 Then, just as they were toddling around, we had a huge thunderstorm, with hail falling.

They managed to get all the babies to safety, except the hail was so bad, one baby was left on the porch. So we grabbed it up and brought baby inside. I wrapped him in a towel & held him for about an hour. He was very calm, but shivering. After the rain/hail eased up, mama cat came back looking for baby, so I put him back on the porch. He started meowing, and mama came to get him.

Just then it started even more hailing! Mama grabbed baby in her mouth and took off running to safety again.

Finally the storms were over. Since then, babies have been out a little bit, but we’ve had more storms.

Glad we have made them some shelters out there, plus they run next door, too.

Other news, Wow Wow had her babies, too. They are all out in the front yard shelter. There are six of them, but haven’t been out yet.

Here’s a photo of the baby while I was holding it in the towel. 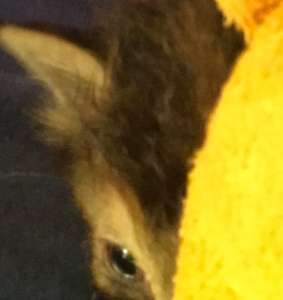