I always check my potatoes for green poison!

Are your potatoes poison? They could be. The potato is in the family of the deadly nightshade plant. All  green parts of the potato is highly toxic, including leaves, stems, sprouts (eyes), and even any green parts on the peeled potato.

If eaten, it will cause, at the very least, an upset stomach…and at the worst…death!

In the past, this alkeloid toxin was used as a remedy for ailments such as, pain relief, an anti-inflamatory, and to ease the symptoms of rheumatism. I would hope these were not administered orally! If they were, I wonder if the doctor wondered why his patients were not getting any better, or even died!

Cooking the potatoes will remove and destroy most of the alkaloid concentrations, so they are mostly safe to eat. Try not to use any potato that shows even a hint of green to the white part, just to be safe. Exposure to light will also cause a potato to turn green, so store in a dark place.

There are many varieties of the potato, and are a staple food source all over the world. I’m not going to stop eating them, but I am careful to cut away any green I see on them.

For a look at this information on the potato, and 9 other common foods that are a bit poisonous, follow this link. http://listverse.com/2009/01/06/top-10-poisonous 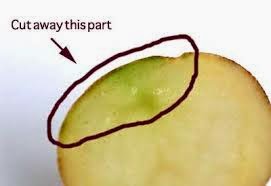