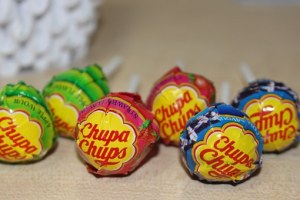 Today’s Daily Post word prompt is ‘lollipop’. That’s a cute word for a sweet little candy! I do like lollipops, and buy them every so often. My favorite used to be the ones called, “Charms”. I’m not sure you can find them now, or at least the last ones I found, just weren’t like the ones I’d get a long time ago. They usually had 2 flavors in one pop, I think a sweet part and a sour part. The one I liked was the lemon/lime one.

I do like all kinds of them, though. Tootsie Roll Pops, Dum-Dums,  Chupa-Chups, and even those little ‘safety suckers’, that had a paper loop for a handle. I guess that was for kids. It didn’t have a hard stick, which may be dangerous for a little kid. Anyway, they tasted good.

Wouldn’t you know, when this prompt came up today, that I’d not have even one lollipop in the house to take a photo of! I already ate them all! 🙂

I’ve heard several songs about lollipops, as I’ve read some posts today. I haven’t heard this one from anyone yet, but it was the first one that came to mind for me, today. Enjoy! …

“My Boy Lollipop”, by Millie Small, was released in 1964, from the album of the same name. It was written by Robert Spencer, and Johnny Roberts, and is on the Fontana, Island, Smash labels.