Continuing my list of the many jobs I’ve had in the past. I’ve forgotten exactly when I did these, so I won’t put any dates.

I tried selling Avon cosmetic products three different times over the years. I wasn’t  very good at it. These were all before on-line shopping and the internet, so I’d have to walk the sidewalks, knocking on doors. Seems it was always in the summer time, and so hot out, I’d be melting! I seem to remember they gave you a starter kit, or maybe we had to purchase one to get started. The first two times I don’t think we had a certain area (territory) assigned, so just went around my neighborhood. I’d leave the books, if no one was home when I knocked. If they answered the door, I’d try to get them to buy something. Most didn’t, but those that did, we’d put in the order, then pick up the order in a week, sort it all out into little bags, then have to go back to the people’s houses to deliver it, and collect the money. Ugh! It worked out sometimes, but other times I could never collect any money, they’d moved, or just changed their mind. That meant I didn’t get paid. I’d either have to pay for it myself, and keep it, or send it back. Can’t remember what I did. The whole deal was not fun. The last time, I did have an area, but it wasn’t any better. In fact, at one house, they invited me in, said they’d order something, but could I wait a few minutes…they were watching a basketball game and didn’t want to miss any of it. So, I waited it seemed forever, then I just left. That was it for me…no more selling Avon!

This next one was a funny and fun job, if you can call it that. I did get paid a few dollars, so I say it was a job. Only lasted about a week.

I took part in an Arbitron Radio Ratings job. They sent a bunch of information, and a diary/log to keep of what we listened to, what station we listened to, and what times, and how long we listened to the radio during this ratings period. It was fun because I listened to a lot of different radio programs at the time, and hey, they were going to pay me! 🙂

I’ve actually done this two or three different times (I think once they get your name, they keep asking again) and it was fun every time. I was also paid for reviewing a very short video tape of a new sit-com TV show, and give them a review of it. Another time, my dad and I did a Nielsen’s Rating diary for TV shows.

Here’s some of the info they sent: 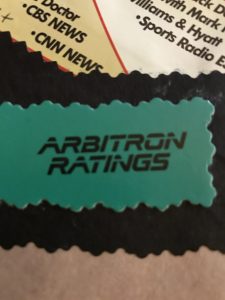 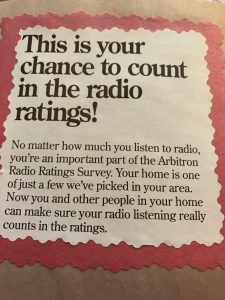 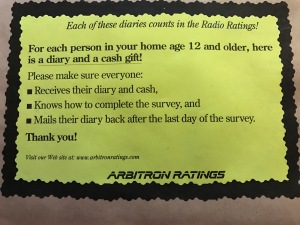