I SURVIVED AN F-5 TORNADO

Wednesday, May 11, 2016, will be the 46th anniversary of the Lubbock, TX tornado. From later assessment of the devastation, it was determined to be rated F-5, the highest on the Fujita scale. This is my story.

May 11, 1970, is a date I’ll never forget. I was attending night classes at Draughon’s Business College in downtown Lubbock. We had noticed there was a storm coming, because of some lightning off to the west. Classes were let out early because of that.

My dad was picking me up in my car, but didn’t know we got out early, so I was waiting outside for him, around 9:30 or so. They’d already closed up the building, and only me, and a couple of others, were waiting for our rides. The wind was starting to get gusty. By the time my dad got there, it was starting to rain.

We headed for home down Ave. H, (now Buddy Holly Ave.) going north. Right before the underpass on Ave. H, at about 5th or 6th street, the wind, rain, and hail was so bad he decided to not go under the underpass, but turn back, heading south, to a little gas station/garage there on the corner. It had an overhanging roof over the gas pumps. We stopped there to wait for the hail to let up, but it only got worse. We had no idea it was a tornado bearing down on us. All we knew was the front end of the car was being lifted off the ground, and the brick garage was falling apart.

Bricks hit the car windows, breaking them out. We crawled into the back floorboard of the car, me and then Dad. The wind, hail, rain, and I guess it was the tornado, was so loud we couldn’t even hear each other. The doors to the garage were flapping open and shut. (later we’d see that those doors, the overhanging roof, and only half the garage were the only thing left of the building. I guess we came that close to being blown away). Across the street was a car dealership, and for some reason, I thought I saw those car headlights flashing on and off. (this was later corroborated by others – a strange electrical anomaly).

The hail finally eased off, so Dad said we should try to make it down the street to the courthouse, where he knew there was a basement. We got out of the car and walked the block or so down there. The wind was really strong, so we could hardly stand up. The water in the street was up to our knees, and signs and things were still flying through the air. I don’t know how we kept from getting electrocuted from downed power lines.

We finally made it, and the courthouse doors were actually open, and a few other people were there, too. I noticed I had cuts from the broken window glass, and of course, we were soaking wet. Someone suggested we all go downstairs where there was a tunnel that went to the police station, and emergency shelter, and the emergency operations center. We made our way through the underground tunnel, and found a huge crowd already there. The emergency workers were listening and broadcasting emergency information over their radio.

After awhile, Dad decided to see if we could find a ride home. We went outside – the storm was over by then. Everything downtown was a mess of debris. One of the weirdest things I saw was a street traffic light (on a pole). The metal was twisted all around like a pretzel. We found a guy that had just got off work, from the meat packing plant in another part of town, who said he’d drive us home. He was amazed at the destruction, as it hadn’t effected his work place’s part of town.

We went north on University, going slow to avoid power lines and debris in the streets. We finally made it to the Loop that goes around the city, and headed east toward our neighborhood. As we passed over another underpass, we could see the lower level was filled with water, and the guard rails on the top road were gone. Closer to our house in the Clayton Carter addition, some of the stores at the end of our street (north Ash) had been completely blown away. Our house, however, hadn’t been damaged, but someone’s camper had landed in our back yard, taking out the fence. My mom and sister had gone into our cellar, and didn’t know what had happened to us, until we got home, around 1 a. m.

The next morning, we drove around and took some pictures of the damage, and we had to find a way to get my damaged car back home. I was thinking, if we hadn’t turned around when we did, that night, to go under the garage roof, if we’d continued under the Ave. H underpass, we might not have been alive. That area just past the underpass was almost completely wiped out. As it was, one of my friend’s father was killed in that storm.

Other things I remember, was the electricity and water was out for days, and there were big trucks hauling water to the neighborhoods. We’d go fill up jugs when they came by. I never got to go back to the business college to finish, because the building had been damaged so much, that they closed down the college. We got my car back, and my books were water-soaked, too, and too damaged to be used, also.

My husband was in Viet-nam, at the time, and he only heard of the Lubbock tornado when it was written about in the Stars and Stripes military newspaper. He couldn’t find out if we were ok, for days. 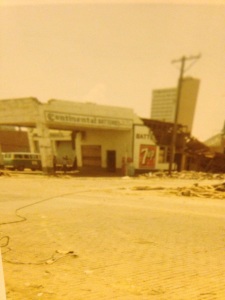 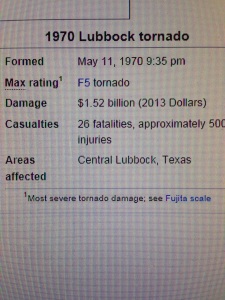 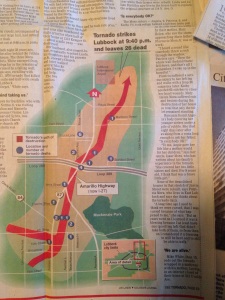 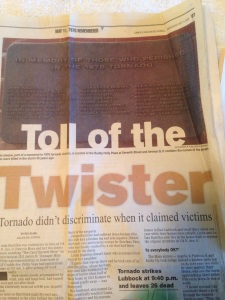 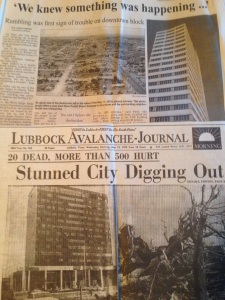 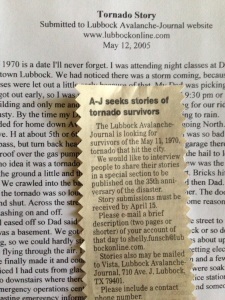 More information on this F-5 tornado can be found here: https://en.wikipedia.org/wiki/1970_Lubbock_tornado